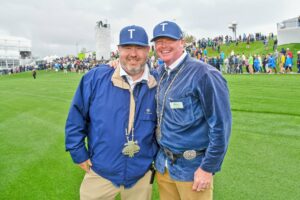 Woods will lead The Thunderbirds in the planning and execution of every facet of the 2020 event, including meeting with current and potential sponsors, recruiting PGA TOUR players to the event, community and sponsor relations, and developing new on-course venues.

“I’m extremely proud to have earned the respect of my fellow Thunderbirds and I’m truly humbled knowing they have placed their trust in me as Tournament Chairman. I pledge to help carry on our unique and impactful traditions within both the professional golf and charitable giving arenas, along with a continued effort to cultivate the special relationship we enjoy with our title sponsor, Waste Management,” Woods said. “The Thunderbirds organization is one of the finest volunteer hosts on the PGA TOUR. We genuinely appreciate our players, fans and sponsors who’ve supported this one-of-a-kind event over the past 84 years.”

An Arizona native, Woods is a graduate of Brophy College Preparatory and The University of Arizona. He is Co-Owner of Farmer Woods Group, a full-service insurance brokerage firm providing risk management resources for a wide variety of businesses and personal asset protection for individuals.

In addition to his full-time career as an insurance professional, newly promoted Lieutenant Colonel Woods is a Commissioned Officer and Black Hawk Helicopter Pilot in Command in the Arizona Army National Guard. Woods entered military service in 1998 and, along with his various peacetime assignments, completed two combat tours in support of Operation Iraqi Freedom between 2005 and 2010. Woods is currently assigned as the Brigade Operations Officer for the 98th Aviation Troop Command headquartered at Phoenix Papago Military Reservation and maintains aircraft proficiency flying multiple training missions monthly. An active Thunderbird since 2011, Woods lives in Phoenix with his wife Bianca of 11 years and two sons, Henry (age 9) and Peter (age 7).

Jenkins was named the 2020 Assistant Tournament Chairman and will assist Woods with all tournament-related operations while preparing to be Tournament Chairman in 2021. Jenkins is a Partner with the national law firm of Quarles & Brady and his practice focuses on commercial bankruptcy and litigation. Additionally, he is Chair of the Arizona Bankruptcy Group and the firm’s Recruiting Committee.

The Thunderbirds were founded in 1937 with the mission of promoting the Valley of the Sun through sports. The Thunderbirds consist of 55 “active” members and more than 280 “life” members. The Thunderbirds raised a record $13.2 million for charity from proceeds from the 2019 WM Phoenix Open and have eclipsed $147 million in charitable giving since its inception in 1932. For more information on The Thunderbirds, visit www.thunderbirdscharities.org.