Thomas Rhett, Old Dominion to Take the Stage at the Iconic 16th Hole for First Ever “Concert in The Coliseum” on Saturday, February 5

Thomas Rhett and Old Dominion will perform live under the lights from the iconic 16th hole at TPC Scottsdale for the first ever “Concert in the Coliseum” on Saturday, Feb. 5, prior to WM Phoenix Open week, which will take place Feb. 7-13.

General admission tickets for this one-of-a-kind event are now sold out.  A limited number of Suites with all-inclusive food and beverage are still available for the show.  Fans interested in purchasing a Suite can send an email to orders@wmphoenixopen.com for more information.  The “Concert in the Coliseum” is a 21 and over event. 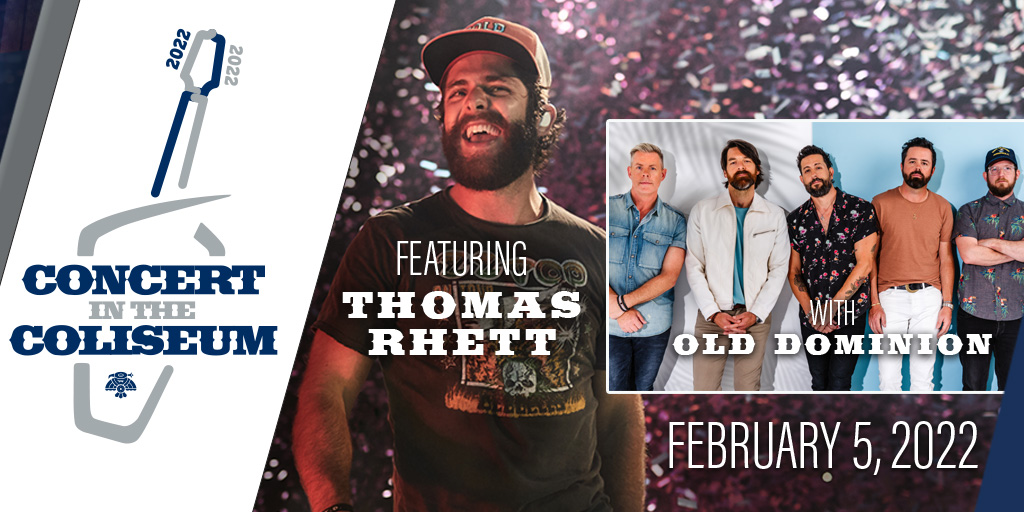 Old Dominion will kick things off at 5 p.m., while Thomas Rhett will take the stage at approximately 6:30 p.m.  The concert will take place on a massive stage that will be built in the middle of the 16th hole fairway strictly for this special Saturday show.  Doors for this concert will open at 3 p.m.

“We’re beyond excited to open the doors early and kick off Waste Management Phoenix Open week with a one-of-a-kind concert at the iconic 16th hole,” said Tournament Chairman Michael Golding. “We’ve all seen the energy fans bring to cheer on the PGA TOUR players at the 16th hole, we can’t wait to see and feel that buzz at night for Thomas Rhett and Old Dominion.  You seriously do not want to miss this, I’m certain tickets will go fast.”

Thomas Rhett’s five studio albums have spawned 18 multi-PLATINUM and GOLD chart-toppers and 10 BILLION global streams as he’s dubbed “the most reliable maker of No. 1 singles in country music” (Variety). He’s been honored with eight ACM Awards, including 2020’s Entertainer of the Year, two CMA Awards, four GRAMMY nominations, plus trophies from the CMT Music Awards, Billboard Awards and iHeartRadio Awards, in addition to being recognized with two CMA Triple Play awards for penning three No. One songs within a 12-month period.

With a renewed clarity and a fresh perspective, Thomas Rhett’s fifth studio double album COUNTRY AGAIN: SIDE A (The Valory Music Co.). released in April. The album’s GOLD-certified lead single “What Your Country Song,” topped Billboard’s Hot Country Charts, while the album’s defining title track marked his 12th consecutive No. 1 song – the longest active streak in the format. The in-demand superstar marked his return to the road with THE CENTER POINT ROAD TOUR. For more information visit www.thomasrhett.com.

Old Dominion is making a return trip to the Waste Management Phoenix Open after they debuted at the Coors Light Birds Nest in 2019.  The group has emerged as one of the hottest breaking bands out of Nashville, fusing clever lyrics and an infectious sound. Their lyrical wit and hook heavy songwriting has certainly proved a winning method – since breaking onto the music scene in 2014, the band has notched eight No. 1 singles at country radio, surpassed one billion on-demand streams, earned several Platinum and Gold single certifications and headlined arenas and amphitheaters around the globe.

Old Dominion are currently the reigning CMA and ACM “Group of the Year.” Most recently, the band earned their 4th consecutive “Group of the Year” win at the 56th Annual ACM Awards and have been nominated for “Vocal Group of the Year” for the 2021 CMA Awards.  In 2020, the band received their first two GRAMMY nominations for “Best Country Duo/Group Performance” and “Best Country Song” for their hit single “Some People Do”, which is featured on their self-title third studio album.  At the 2020 CMT Awards, the band took home their first win for “Group Video of The Year”. The group also notched two nominations for the 2020 CMAs including “Vocal Group” and “Album of the Year” for their self-titled 2019 studio album, nominations for “Top Country Duo/Group” and “Top Country Song” for the 2020 Billboard Music Awards, as well as a “Favorite Duo/Group – Country” nod for the 2020 American Music Awards.

The band’s current single, “I Was on a Boat That Day”, was released in May of 2021 and is the lead single off their fourth studio album Time, Tequila and Therapy, which just dropped on Oct. 8, 2021.

The Thunderbirds were founded in 1937 with the mission of promoting the Valley of the Sun through sports. The Thunderbirds consist of 55 “active” members and more than 280 “life” members who have helped the tournament eclipse $165 million in charitable giving since its inception in 1932.  For more information on The Thunderbirds, visit www.thunderbirdscharities.org.

Thomas Rhett, Old Dominion to Take the Stage at the Iconic 16th Hole for First Ever “Concert in The Coliseum” on Saturday, February 52021-11-012021-11-02https://wmphoenixopen.com/wp-content/uploads/new_logo_fc_web.pngWaste Management Phoenix Openhttps://wmphoenixopen.com/wp-content/uploads/citc_onsalenow_web.jpg200px200px
Recent News
Thanks for signing up!
SPONSORED BY