GET YOUR TICKETS NOW!

TICKETS ON SALE NOW AT COORSLIGHTBIRDSNEST.COM

The lineup for the 2020 Coors Light Birds Nest is starting to take shape as country music superstars Dierks Bentley and Miranda Lambert have committed to perform at the popular entertainment venue at the Waste Management Phoenix Open Presented by the Ak-Chin Indian Community. Tickets for the two shows are on sale now and can be purchased by visiting www.coorslightbirdsnest.com. The remaining Coors Light Birds Nest lineup will be announced as more artists are confirmed.

“Country music has always been a fan favorite at the Coors Lights Birds Nest and we’re absolutely thrilled to have these two country megastars headline Wednesday and Friday night,” said Tim Woods, WM Phoenix Open Tournament Chairman. “The incredible energy and stage presence both these performers bring to the table is unmatched and we’re anxious to see them put on a great show for our fans.”

Two-time GRAMMY Award winner and nine-time Academy of Country Music Female Vocalist of the Year Miranda Lambert will kick off the Coors Light Birds Nest on Wed., Jan. 29, bringing her feisty, down-home personality and stellar vocals to the stage. Lambert is currently promoting The Wildcard Tour, named for Lambert’s November 1 seventh-studio album designated one of the “most anticipated albums of Fall 2019” by Billboard, featuring 27 dates across several major markets throughout the U.S. and Canada. Lambert’s first six studio albums were certified platinum and produced hit singles such as “House that Built Me,” “Heart Like Mine,” “Over You,” and “Somethin’ Bad” (featuring Carrie Underwood), all of which hit the No. 1 position on Billboard’s Hot Country Songs.

“Miranda Lambert is without a doubt our biggest Wednesday headliner to take the stage at the Birds Nest,” Woods said. “She’s an amazingly accomplished performer and we’re pumped to have the Birds Nest be one of the stops on her upcoming Wildcard tour.”

No stranger to the Coors Light Birds Nest, Phoenix native Dierks Bentley will take to the stage at the ever-popular music festival on Friday, Jan. 31. Bentley’s studio albums have accounted for 25 singles on the Hot Country Songs and Country Airplay charts, of which 16 have reached number one – his debut single “What Was I Thinkin'”, “Come a Little Closer”, “Settle for a Slowdown”, “Every Mile a Memory”, “Free and Easy (Down the Road I Go)”, “Feel That Fire”, “Sideways”, “Am I the Only One”, “Home”, “5-1-5-0”, “I Hold On”, “Drunk on a Plane”, “Say You Do”, “Somewhere on a Beach”, “Different for Girls” and “Woman, Amen”. Seven more of his singles have reached the Top-5.

“Country music has become a staple of the Birds Nest and Dierks, one of country music’s biggest stars, is obviously a huge crowd favorite,” said Woods. “A personal friend for over 30 years, his ties to the Valley, the tournament and The Thunderbirds run deep as an Arizona native whose father, Leon, was a Thunderbird. Dierks will undoubtedly put on a tremendous show for the local fans as he always does.”

Coors Light Birds Nest general admission tickets will start at $75, while VIP tickets are available starting at $285 each and provide exclusive access to the Jameson VIP area where guests are treated to a complimentary catered dinner, complimentary drinks and access to a newly redesigned premium viewing area for the shows. Organizers encourage fans to buy their tickets early as ticket prices may increase as the event draws closer. 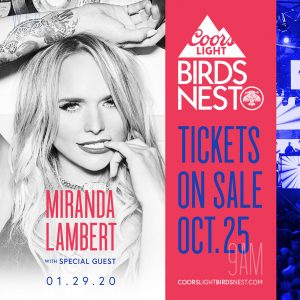 The most decorated artist in the history of the Academy of Country Music, Lambert is the recipient of more than 70 prestigious awards and special honors: 34 ACM Awards (including 9 ACM Female Vocalist of the Year Awards), 13 CMA Awards (Country Music Association), 2 GRAMMY Awards, the Harmony Award (Nashville Symphony), Artist in Residence (Country Music Hall of Fame), the ACM Gene Weed Milestone Award, ACM Song of the Decade Award, and recently was named 2019 RIAA’s Artist of the Year.
For more information go to www.mirandalambert.com 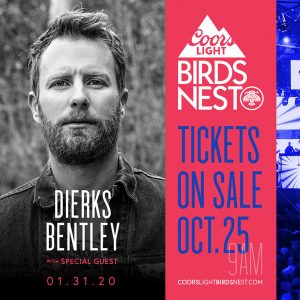 Pegged as “one of Country music’s most enviable brands, equal parts affability and authenticity” (Forbes), Bentley continues to be a dominant voice for the genre with more than 6.4 billion overall digital streams and 19 No. 1 singles. Reaching a new creative high while “making music designed to challenge” (New York Times), Bentley co-wrote 10 of 13 tracks on THE MOUNTAIN, which earned him the highest debut sales of his career and became his seventh chart-topping album. Bentley has amassed countless nominations from the ACMs, CMAs, Billboard Music Awards, and GRAMMYs while being currently nominated for CMA “Male Vocalist of the Year,” “Single of the Year” and “Music Video of the Year.” He has created professional endeavors outside of the music with his Flag & Anthem partnership creating the exclusive lifestyle collection, Desert Son, along with four “Dierks Bentley’s Whiskey Row” locations across the country. For more information visit www.dierks.com.

GET YOUR TICKETS NOW!
Dierks Bentley, Miranda Lambert to Perform at 2020 Coors Light Birds Nest2019-10-242019-10-25/wp-content/uploads/2015/03/wmpo-logo1.pngWaste Management Phoenix Openhttps://wmphoenixopen.com/wp-content/uploads/1920x1080-wed_fri.jpg200px200px
Recent News
Thanks for signing up!
SPONSORED BY